What to do with your gown after "I do"

What To Do With Your Gown After "I Do"

What to do with your gown after “I do” 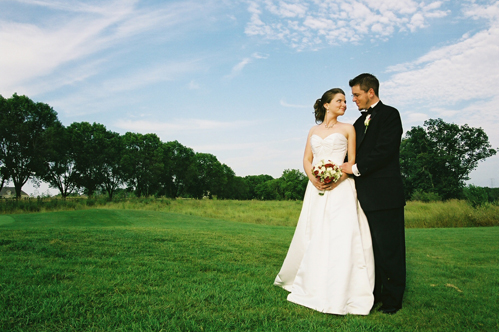 Just a few weeks ago, my husband, Ian, and I celebrated our sixth wedding anniversary (there we are in the photo!). Throughout the day, my mind wandered back to whatever event was taking place around that time: sending an undercover “good morning” text to my groom, arriving at the salon, being laced into my gown…my beautiful gown! I’m fairly embarrassed to admit this, but it’s still hanging in a closet in my parents’ basement. I started out with a fairly good excuse: Ian and I shipped off to New York City just three weeks after we married, and I’m pretty sure my dress would have filled the single closet we had. Today, more than half a decade later, we have plenty of closets, and it’s still hanging there with a dirty hem and half-done bustle. My poor gown. I’m committed to giving it some love, but I’m not sure what to do, so I asked around.

Turns out, many women I asked share a similar lament, including Carrie Pace. “After we came home from our wedding weekend, I hung my gown up in my office and that is where it has remained ever since,” she tells me. But unlike mine, it’s kind of become part of her decor: “The gown was such a piece of art that I don’t quite know how to honor it. And even though I’m almost a year out from my wedding, I still love seeing it because it was such a beautiful and perfect day.”

Lots of people took the preservation route. The showy types mounted the gown in a large shadowbox with other wedding mementos; others had it cleaned and packed for storage. Gown preservation is a service provided by some bridal boutiques, including Hartland Bridal, and dry cleaners. One newlywed I talked to, Alison Cefalu, plans to take hers to Joy Cleaners, (414) 777-7181, in Wauwatosa. “I’ve priced out a few places, and it’s pretty consistent across the board,” she says—I agree. “I thought about selling or donating my dress, but I’m just not ready to part with it!” (More on this later.)

I’ve learned that cleaning and preserving a gown can also pave the way for a family tradition. Annie Davidson’s is among the sweetest I’ve heard about: “As a child, I remember sneaking into my Mom’s closet just to peek at the box and imagine what was inside it—no one could see Mom’s dress or open the box until we were preparing for the wedding of my sister or me…As I’m a new mom-to-be, I dream of the same moment with my daughter, if we have one.” A few recent brides I chatted with will have their dresses refashioned into baptismal gowns for their children. My friend Jennifer Billings is saving hers for her kids, too, but for a less formal yet classic affair: “My mom let us wear her dress for dress-up!”

Like Alison, I’m not sure if I’m willing to let my dress go (despite not having seen it for six years), but if I decide to, I have a couple of choices. If I want to recoup some money, I could sell it. Online, there’s always Craigslist, but brides can also opt for a more wedding-specific site like Bride to Bride Boutique or Encore Bridal (the latter is for higher-end attire). Southeastern Wisconsin also has a few of consignment shops that sometimes accept gowns, including UTurn Consignment Boutique in Wauwatosa, which sells all sorts of clothes and accessories. Due to the personal nature of a wedding gown, co-owner Jessica Brittingham says the shop’s staff is very selective. “We’ll consider it if it’s something that’s easy to alter, really simple or just stunning,” she explains. A few cities in Wisconsin do boast consignment shops dedicated to all things bridal. The closest is Sandarella’s Bridal Consignment Shoppe in Oshkosh.

And last, there are numerous places to donate. Bride-to-be Marisa Ann Merkel says she’ll give hers to Brides Against Breast Cancer after her October wedding. The charity will sell it at one of many events throughout the U.S.—proceeds fund cancer education and programs for patients and their loved ones. Brides Across America, which helps military families, also gladly accepts preworn wedding gowns. Lots of local thrift stores take gowns, too.

That’s a lot of options! What do you think I should do? And what route will you take with your own?